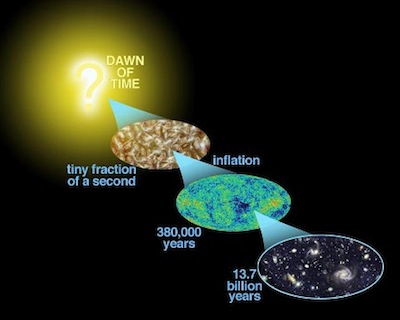 Inflation is often referred to as a period of extreme rapid expansion in the very early universe. While resolving several problems (e.g. Horizon problem, Flatness problem etc.) of the hot Big Bang cosmology, it also provides an elegant explanation for the origin of microscopic quantum fluctuations required as the seed for the formation of the observed large-scale structures such as galaxies like our Milky Way in the universe.

Over the last decade, the precise observations of Cosmic Microwave Background (CMB) anisotropies and Large-Scale Structure (LSS) statistics have provided significant evidence for the inflationary paradigm. Ongoing as well as future missions such as PLANCK with extremely precise measurements will provide further support for the inflationary hypothesis.

Members of the group are currently investigating both theoretically and observationally the physics of inflation by constructing new models and studying their predictions in order to understand the physics of the very early Universe.