Astronomers observe the presence of large-scale magnetic fields in all cosmic structures. Typically the fields are of microgauss strength, while their coherence length is roughly given by the size of the object - galaxies, clusters, filaments. Even a large fraction of the intergalactic medium appears to be permeated by weak magnetic fields. Although the observational evidence for cosmic magnetic fields has improved a lot, their ultimate origin is still poorly understood. 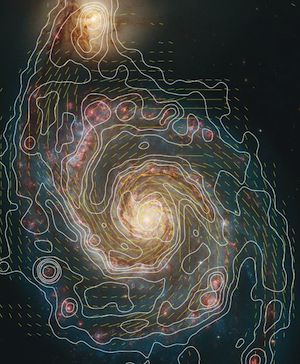 Some astrophysical processes are known to amplify weak seed fields to the observed configurations, however these are typically limited to galaxies and do not necessarily work on scales of clusters and outside of structures. Mechanisms that create seed magnetic fields are also known, but they all seem to have their problems in either generating the required field strength or the observed large coherence lengths.

The most successful explanations for the seed fields so far rely on physics beyond the standard model that lead to amplification of electromagnetic fluctuations during inflation, or the generation of magnetic fields during phase transitions in the early Universe. However, such mechanisms are tightly constrained by the fact that some of side effects are not observed. This leaves us only with the certainty that magnetic fields are generated by nonlinear plasma evolution around decoupling of the Cosmic Microwave Background photons, although these turn out to be too weak to account for the observed fields.